The Girl with The Red Lipstick 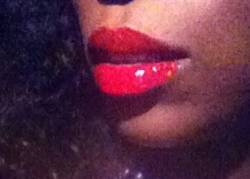 They told me she died.

We met in 8th grade and I had no idea we would form such a bond. My earliest memory of her is of her face filled with joy when she passed the 8th grade Constitution test with a 98% and walked home with the test in her hand to show everyone. I knew then that she wanted more.

We were the only two in our 8th grade class that went to the same high school. I think that forced us to become fast friends. We were inseparable and becoming best friends was effortless. My freshman year boyfriend convinced us we could read each others minds. We believed it.

Not just because of her fair skin, long black silky hair, sexy body and crooked smile that showed vulnerability. It was because of who she was inside. She was genuinely sweet and no amount of heartache or hardship made her anything less. Although we had the same dismal home life, almost a carbon copy, her setbacks in life made her long for love, affection and for opportunities to be a part or something better. I was the opposite. My home life made me angry and I hated existing. I thought my world would always be the way it was then. I had no hope. But she always shared her dreams of something better. Her dreams always included me. She talked about reaching adulthood and leaving our parents behind. We would share an apartment, but only on streets that started in the 80th block and above; nothing below 79th street. You would have to be from the Southside of Chicago to understand that reference. We would take care of each others children and we would raise them together and they would love each other like sisters and brothers. We never even talked about where our men were going to live; we just knew we would always be best friends. Her dreams made me feel hopeful. I never thought I would live past high school and yet, she had our entire life planned years beyond high school.

She was tougher than she thought.

I remember one weekend when I stayed at her house we went to a park in her neighborhood. She happened to live in a racist neighborhood where blacks were not very welcomed. Yes, she was black but her entire family was very fair skinned and their race was often not discernible. While at the park a kid came and told me that I better leave the park because blacks were not allowed. She picked up a stick and threatened the boy. When he said that he was going to get his friends and family to beat us up, she told him that she would be waiting right there and was ready to fight. I finally urged her crazy butt to leave and asked her why she was so determined to fight them. She said that she would never let anyone talk to me like that. She loved me then.

She never hid her home life from me. I stayed at her house constantly regardless of what was going on. She trusted me. I remember staying up all night with her, her stepmother and step siblings singing songs and cracking jokes. We always had an inside joke about her stepmother because she swore she was hitting those high notes. But she truly was not. It wasn’t until much later that she also became a fixture at my house. She knew everything about me. There was nothing to hide. She always told me to hold on because we would be 18 one day and everything we were experiencing would be a memory. I believed her because her eyes held so much hope.

My mother loved her.

"The girl with the red lipstick?" would be her response when I asked if she could come over. I don't think I ever heard my mother refer to her by her name. She always had a cute little nickname for her. Later she would just yell "girls" and we both went running to see what she had cooked for us to eat. When my mother died, I thought about her because I wanted to call her.

I don’t know exactly when we stopped talking. I just know that the summer going into senior year we didn't see each other at all. Senior year, we avoided each other like the plague. No arguing, no fighting, no long drawn out battle of wits...just silence. I was there when she lost her virginity but not there for her wedding day or the birth or her children. I never thought that would happen. When we both finally realized there was a life between high school and getting our own apartments, we were not friends and could not discuss what colleges we were going to and how she would later marry her high school sweetheart.

Years passed. We finished college, got married, she had kids and we started adulthood without each other. I always thought of her. I looked for her on Facebook, googled her name, asked about her and looked for her in crowds whenever I went home to Chicago. I couldn't find her. Then one day my play sister called and told me that someone had given her a phone number to reach her. We were both excited. My play sister called her and they had a wonderful conversation. I called her and left a message for her but she never called back. But I do remember my play sister telling me that she asked her if I was still mean. That said it all. I never called her again.

I just wish things hadn’t ended the way they had. You ever get a friend request from someone on Facebook that you hadn’t spoken to since high school or college or whatever and think “Ok, I guess we can be friends now because we realize that the past should be forgotten?” I wish that could have been us. Each time I received a friend request I hoped it was from her. Now, it will never be from her.

I think most people get older and wiser and think back on life. If we are honest with ourselves, there are a few things we wish we could have done differently. A guy we wish we would have never dated. Something that we wish we had never said. Hurt someone that we wish we hadn’t. Because we were kids, and part of life is making mistakes, I don’t feel that neither she nor I owe one another apologies. But I would have loved to know her as an adult. To help her get through life just as she had helped me get through my teenage years.

She is the one I miss the most. She is the reason why I have no interest in reminiscing about high school or participating in reunion activities. She is a great loss in my life and I just can’t imagine revisiting that time in my life without her sitting next to me and laughing hysterically about all the ridiculous things we did together.

I have no idea if she ever missed me. I know that she remembered me. But she only knew the hurt me. The me that she often saved by just punching my shoulder and saying “girl please, pretty soon you won’t even remember that crap happened.” I wonder if she was still as positive. I wonder if her boys are as kind, loving and brave as she was. I wonder if she still offered her heart to any and everyone without fear of being hurt. If she still had that cute crooked smile. I never spoke to her after junior year, but now that she has died, I talk to her every day. I tell her about my life. I ask her about her marriage, her dad, her children, what her plans were for the next 5 years. I ask her for advice. I tell her that I love her. I tell her that I wish we would have spoken before she died. I tell her to look for me, because maybe someday we will still have that apartment together...somewhere...somehow.

Tweet
Tags:
DEATH OF A FRIEND FRIENDSHIP LOVE REGRET THE LOSS OF A FRIEND Recipes
I Don't Need To See Your Penis To Know That I Don'...
To Just Breathe the Same Air as Him

Why I Give Away Shoes

If You Want to Know If A Woman is Confident, Look at Her Shoes

Here's to ALL the original "Rosie" Divas!