Who's Rubbing You The Wrong Way? Brown Butter and Sage Pasta 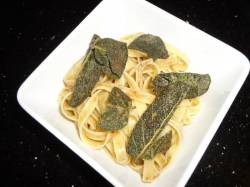 When I was younger it would drive me crazy when people accused me of things that were not true. It started with my mom. She would accuse me of breaking something and I had no idea of what she was talking about. But she was overbearing and intent on having her way and did not want to hear anything I had to say. I would have to admit to something I did not do and take the punishment for it. Often, the punishment was too severe.

Then in elementary school, I was accused of getting good grades and excelling on standardized tests or in general because my mother was a school mom and volunteered in the classroom a lot. But my mother did not grade the assignments and she definitely was not grading standardized tests given out by the state. No matter what I said, no one believed that I was excelling by my own efforts. I eventually just had to concede and allow them to believe what they wanted so that I could have friends. I was miserable...by choice.

Later, when I was in graduate school and I did well, the other students said it was just because I was pretty and the professor liked me. Although I only saw the professor when they did, was with them all night at the study sessions and my presentations were so well done that other students asked me for help constanty, they just did not believe I could understand the concepts better than them. I ate lunch and dinner alone in graduate school...by choice.

Jump forward to my misearable marriage. I married a guy that although he moved into my house in the better neighborhood, started driving my car and networked with all my professional friends, he said that the only reason I made good  money was because "everyone makes good money". The only reason I lived in my house was because someone had to buy it for me. I have no idea who that person was, but I wish they would pay the mortgage as well. I stopped trying to convince him and he intentionally spread his belief to anyone he knew.

Now, recently when I was playing a friendly drunken game with friends I was accused of cheating in a game I've never played before. And although I'm doing the exact same thing the other person that is new to the game is doing, I'm the cheater. I ended up with a stack of money bigger than others and I had to have been cheating. There was no other option. No matter how many times I explained, it went on deaf ears. I was not cheating. There is more to the story but point is, I didn't cheat especially in a game I was already winning.

Listen, I'm not acting as the victim here, I'm just stating what happened and trying to process it. What rubs me the wrong way is being accused of something that is not true. It drives me crazy. To the point of reclusion.

When I was in the 7th grade my wonderful teacher, Mr. Bennett, asked me why I cared so much. He told me that I should not be overly concerned about what others think. But at that age, I did not really learn that lesson.

Later, in graduate school during a conversation with a professor he said "I heard the rumors and I know they are not true. But why does it bother you this much? Why does it drive you to where you are now? To the point of exclusion and reclusion." He then said that unless I take the time to try to understand it and to move on from it, I was going to constantly repeat the same situation over and over. He was right because each time this happens I just write those people off and let them believe what they want to believe but I'm left with my reaction which may be bigger than the sitaution. Never analyzing the experience and reconciling my past so that I can learn and grow.

I'm finally, right now, at the point in my life ready to deal with these feelings and my issues. And yes, I understand this is all about how I deal with situations, so I'm trying to learn. When a situation constantly provokes a reaction out of you that is unhealthy, that is a sign that we there is a lesson somewhere in the situation we have to learn and we need to grow.

What situations or people in your life are providing you with an opportunity to grow?

I shared a recipe that includes sage because of the wonderful spiritual properties associated with sage. It is known to cleanse your spirit and surroundings. It is also known as the "thinkers herb" because it supports concentration, helps with mental clarity when dealing with grief and depression, enhances attention span, and improves the senses. I have a bunch of sage growing in my garden. The smell of it really puts me in a calmer place. I also love to cook with it.

Tweet
Tags:
fettuccine healing pasta Recipes sage
Adoption Story: Even Birds with Broken Wings Dese...
If You Want to Know If A Woman is Confident, Look ...

Adoption Story: Even Birds with Broken Wings Deserve to Fly